To Hab and Hab Not

Once upon a time, little Tommy was a traditional buffalo wing eater. He’d enjoy his buffalo wings at medium-high heat, and dip them in bleu cheese. He loved that buffalo bleu flavor so much, he slathered the stuff all over his potatoes, or rice, or whatever was on the menu at home. In fact, little entrepreneur Tommy thought about producing and bottling the two flavors mixed together long before it actually happened in real life.

Along the way, little Tommy would try out an occasional Teriyaki wing or maybe a Jerk wing but that’s about as crazy as he’d venture out of his lane.

One afternoon in Wingaddicts land, little Tommy pulled into the parking lot of one of his favorite local BBQ spots that had recently come under new ownership as Reid’s BBQ. It was at the beginning of the Covid lockdown, so he called in an order from the parking lot. When he spoke about smoked wings with Kevin Reid, the owner, he was told he needed to try Smoked Habanero (queue the danger theme music).

* Please click on the restaurant names for their websites and menus throughout this blog, and click on the wing photos for links to our actual Wingaddicts episode there! We love your feedback too! 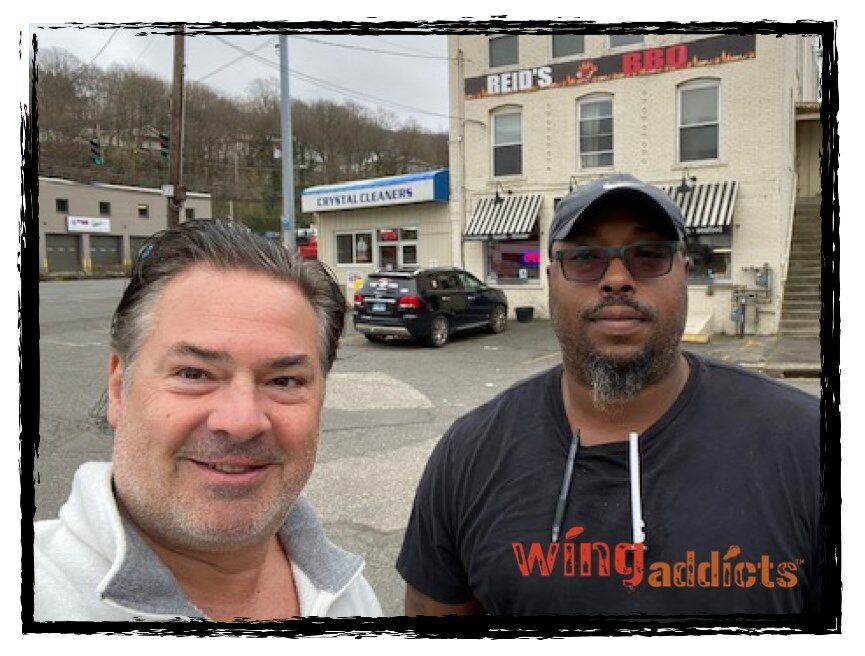 And now it's time for a return to Reid's for an official Wingaddicts episode with the boys. The wing menu has grown!! 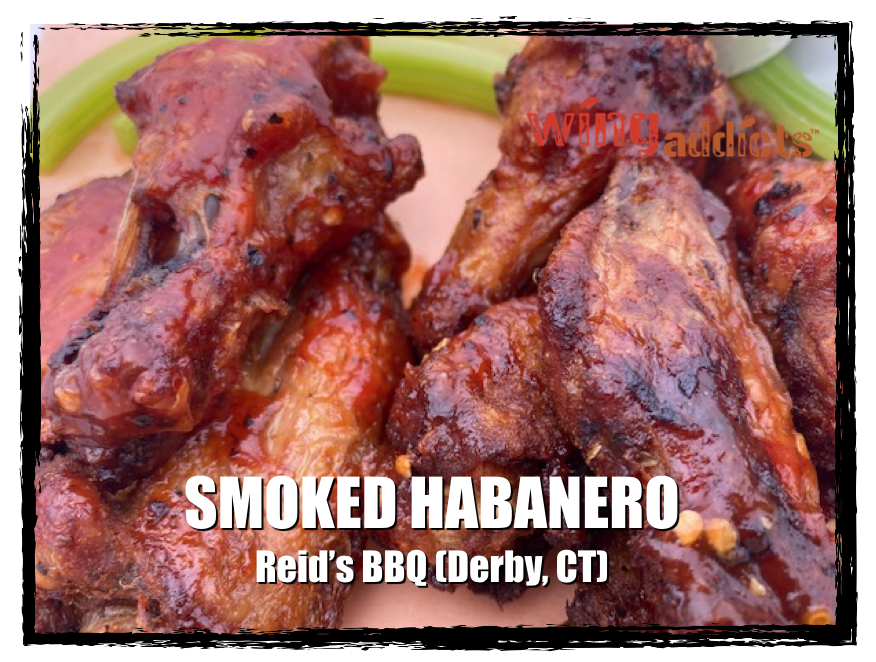 And thus began a journey into Habanero World, a place where true love can be found.

Named after the Cuban city of LaHabana, the Habanero is a Spanish pepper and is a hotter variety of the chili pepper. A ripe Habanero is between one and two inches long and are rated "very hot" on the Scoville scale at between 100,000 - 350,000. The pepper’s heat, flavor, and aroma make it a popular ingredient in hot sauces. In 1999, the Habanero was listed in the Guinness Book of World Records as the world’s hottest chili, but it has since been displaced by other peppers such as the Bhut jolokia (ghost pepper), the Trinidad moruga scorpion, and a new hybrid subspecies the Carolina Reaper (a cross between ghost pepper and red habanero). 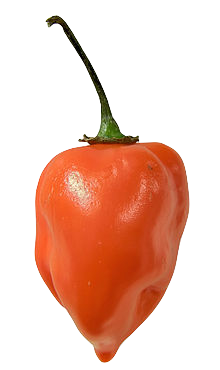 Since wing restaurants aren’t in the business of melting peoples’ faces off (unless by special request!), wing recipes with Habanero peppers are toned down by combing them with different fruity ingredients. Here are a few The Wingaddicts have come upon since that fateful day:

My first (of many) Mango Habanero adventures came at Hometown Pizza in Southbury. Recommended by Wingaddict Pat O’Brien, my life was changed forever when I first experienced this amazing fruity flavor. It had a little spice to it, but no more really than a slightly above average hot buffalo sauce. 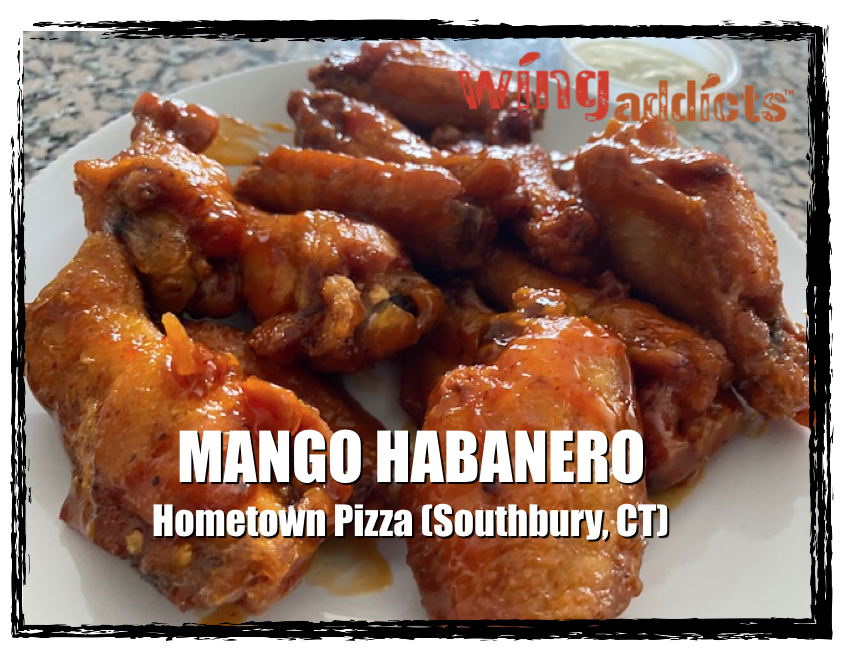 Our next Wingaddicts episode featuring Mango Hab (that’s what the cool people call it, you know, the lingo) came at Senor Pancho’s in Middlebury. I know, I know, you wouldn’t normally go to a Mexican restaurant for wings but damn - Mexico is the top producer of the Habanero Pepper! And, these wings stood up with any we’ve had before or since! You're going to have to trust us on this one! 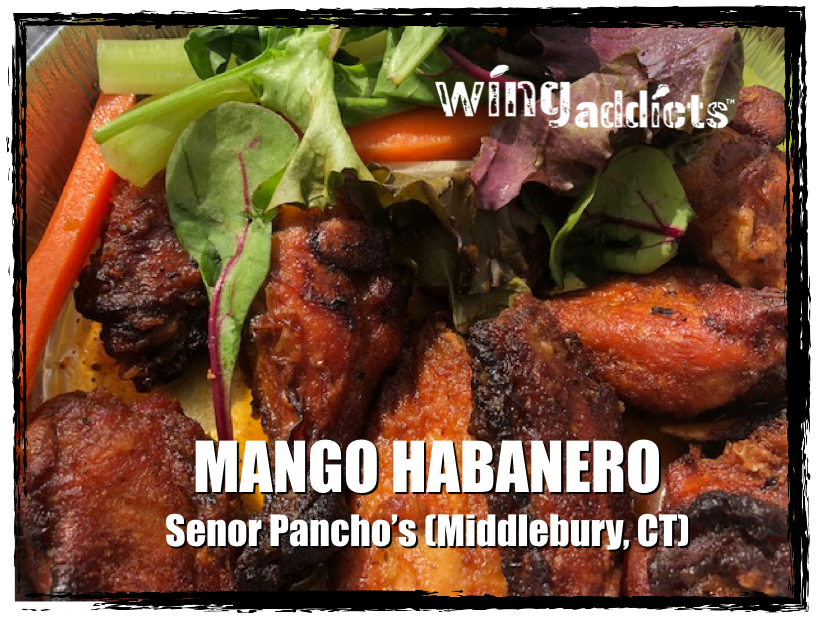 Early last summer we did a little “Wings on the Hood" in Wallingford and grabbed some Mango Habs at Gaetano’s Tavern on Main. Hand delivered to the hood of the Jeep by Chef Christian Munoz, these wings are prepared with a roast-off method and then they fry them to order to make them extra crispy. These were certainly extra crispy. 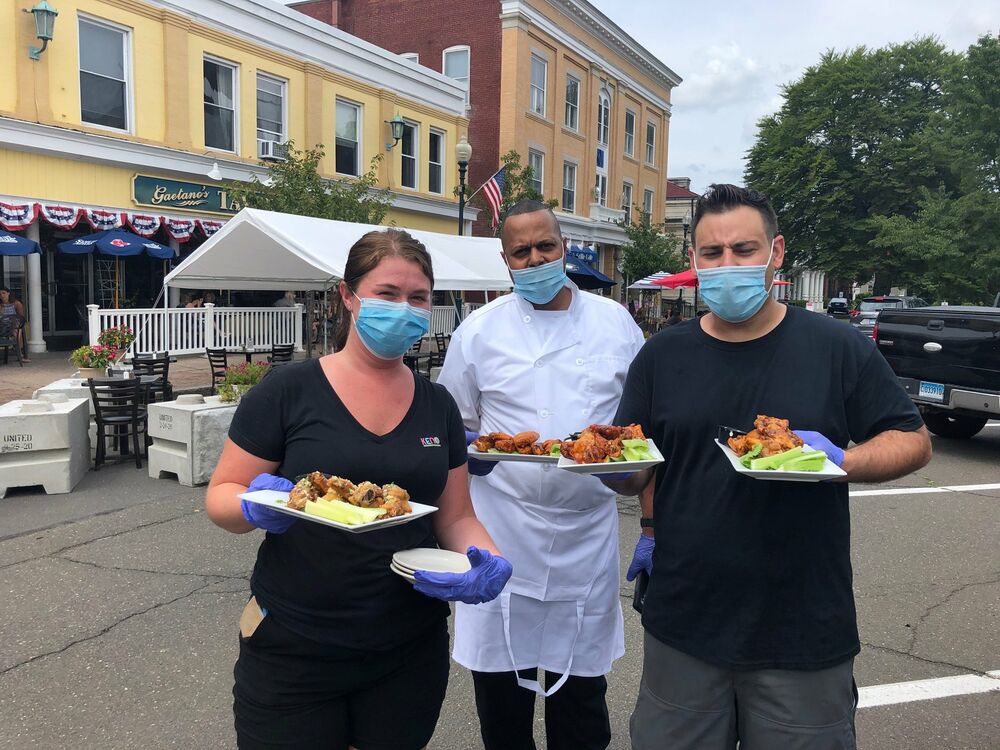 One of our all-time favorite Habanero wings came at Bonfire Grille in Milford. Their Bonfire Blaze was the absolute perfect combination of flavor and heat. Delicious, but not torturous, we still did need at frozen sangria to put out the little fires in our mouths. What a treat! Bonfire even sells its own brand of Habanero Hot Sauce. Wish I had stock in the company! Watch us react to the heat at the 9:40 mark of (S4:E9) 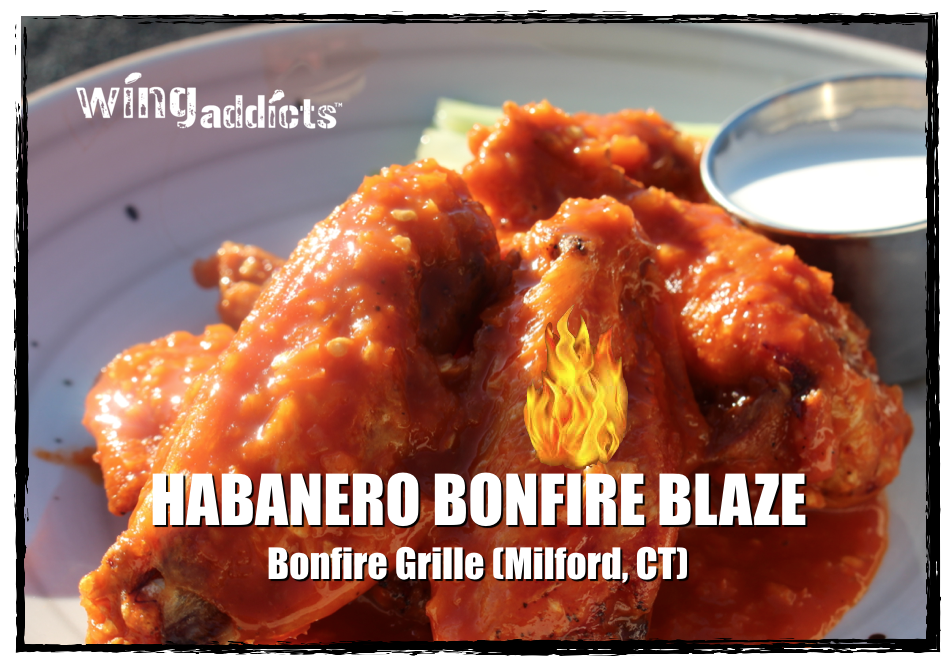 We snuck over to Naugatuck and enjoyed some Mango Habs at The Victoria Inn at Christmas time, and then started up the new year over at 585 Main. Both were on point! 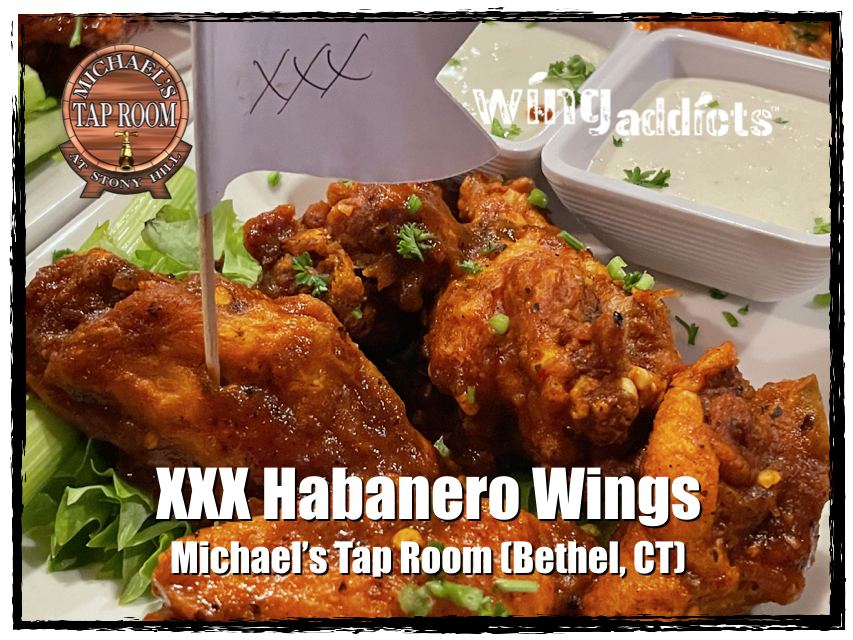 Of course we tried out the Habanero wings at Dew Drop Inn. In fact, with over 100 flavors on their menu (and multiple visits by us - including RELAPSE, Episode 2) we tried their straight Habanero Wings, and for the first time tried Strawberry Habanero and then Pineapple Mango Habanero! Whoa! Amazing!

We also got our hands on a Pineapple Habanero wing at Hop Haus over in Southington during Season 3, out on the hood. What an awesome combo of subtle pineapple flavor and not too much heat. And the beer. Did I say "the beer?" This place is vastly underrated.

We later caught a completely out of left field version of Habanero over at JJ Stacks in Brookfield where we met up with the Bourbon Habanero Honey wings with a nice pickled pepper garnish. We were all three floored by the unique flavor of the peppers, the sweet honey, the BBQ and the Habanero on the back. 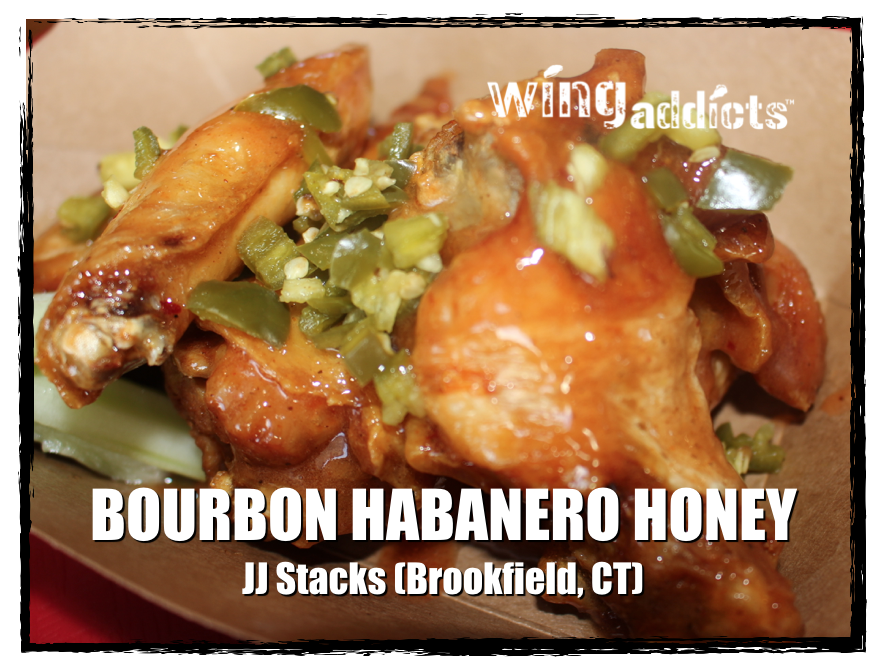 This "Lost Episode" of last summer featured a Wingaddicts Original; Berry Balsamic Habanero wings, created by our own Wingchef Ryan Pasler! We’re well aware that many of the amazing wing spots we’ve visited make some version of Habanero wings, and maybe we just didn’t try one out there that day. 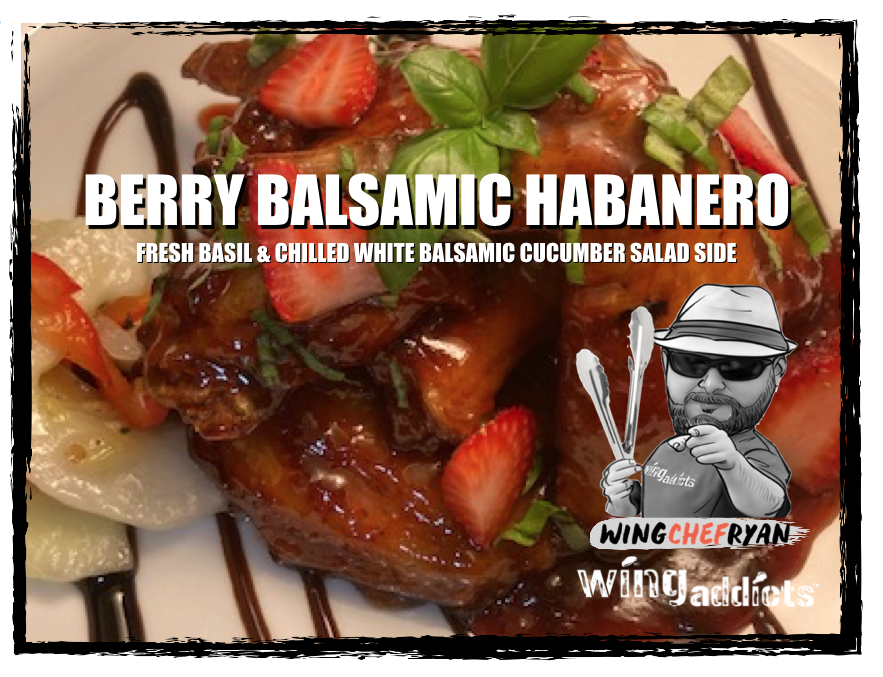 Next week we’ll get into some of the “other” peppers we’ve enjoyed on wings along the way including the Ghost Pepper, Jalapeno, Scotch Bonnet, Gochujang, Cayenne, Cherry Peppers, Shishito Peppers, and other unspeakable face melters!

Who makes your favorite Habanero wings? We’d love to hear!

Previous 25 Wings You've Never Had
Next Breaded or Naked?